Recently Heroku has changed their terms that every free application should be inactive for 6 hours a day. This will not work out if we are going to depend on heroku to host a application which we run without any break. Luckily I came to know about Openshift in one of my recent projects and checked their pricing. I was surpised to see that they are also offering some free plans.

Openshift is a service provided by Redhat. They are offering various plans and it includes a free plan which lets us host upto three applications for free. Lets see how we can host a django application for free in openshift online.

I'm explaining the steps for deployment from using an Ubuntu system. But most of the methods will remain same irrespective of the operating system.

Go to Openshift site and create an account using your email address. This is free. No credit card or any other payment information required.

Install Openshift client tools in your system. The tool is available for all the most popular platforms. Instructions for those operating systems can be found in openshift documentation. In case of Ubuntu, use the command

To start the setup, run the command

When asked for server hostname, enter

You can leave it blank, if it is the default value. Then enter your openshift username and password when prompted.

If you are not using git, download and install git from Git SCM. You can learn more about git from the presentation on Slideshare.

Method 1: Login to your openshift account and create an application. After creating the application, clone it to your system using the SSH URL shown under the heading source code.

Method 2: You can also create openshift application using the command

You can use any of these methods to create openshift application. You can select other available python versions also while creating the app. When you create app using the command line you will see output similar to the one given below. 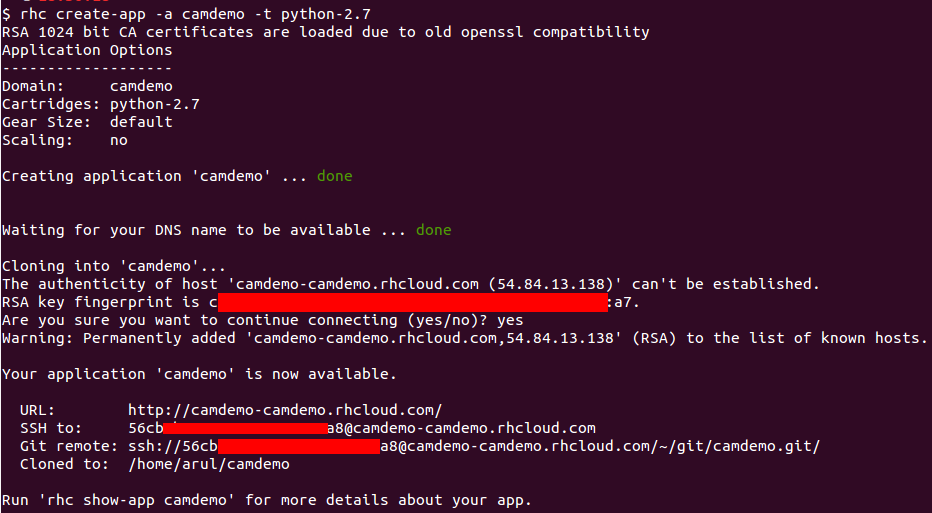 Create (or move) your django in the root folder of the cloned openshift repo.

Adding the cartridge will give a output similar to the one given below.

After adding the cartridge, change your database settings as given below.

Update the content of the file wsgi.py found in the root folder of the repo.

Replace the <app-name> with your app name.

Post deployment action hook can be used to place the commands that should be run in server deployment of the product. There will be a hidden folder named .openshift in the root folder of the app. Inside that folder create a file named post_deploy if it doesn't exist.

Here we are running the commands for database migrations and collecting static files. If you need to run more commands, you can add them here.

Commit your changes using the commands

You can give a commit message of your choice. After committing, push the application to heroku using the command

After pushing the code, you will be access your django app using the openshift app's URL which you get while creating the app.

You can view app details using the command

It will give an output similar to the one given below.

You can view your app's state using the command

It will give an output similar to the one given below.

Configure CNAME in your domain DNS editor with host as www and Points to as your app's openshift URL. Now you should be able to access your app in your custom domain.

Now we have successfully deployed a django application on openshift. Feel free to post your feedback and questions as comments.